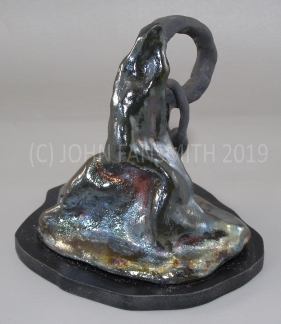 In Greek mythology, Prometheus stole fire from the gods and gave it to mankind for which he was punished by being chained to a rock and having his liver eaten by vultures. My PROMETHEUS, a hand built and raku fired paper clay sculpture deconstructs the myth by having Prometheus part of and one with the rock holding the chain rather than being held.(8” x 8” x 8”)