There maybe many things in war: courage and sacrifice,suffering and resiliency, despair and determination; but there is no glory. THE GLORY OF WAR is not a vessel, it is a Raku fired ceramic sculpture that through the color, tonality and distortion of the faces set against the matte black of the background surface seeks to convey what the glory of war really means.

Among the legends and mythology of Western Civilization is that of The Watchers, a different, and somewhat sinister, species in human form living among us for thousands of years. I have used the free form and color of the traditional monotype medium to evoke the elemental unease that lies at the core of this legend.

Compression #4 is an abstract, perhaps conceptual piece which uses geometric shapes, mosaic composition principles and a red/yellow/orange/black palette to evoke the feeling of tension created by the interaction  of pressure and resistance.  While it is numbered, it is a monoprint, a single, unique print.  The numbering refers to the particular image and its coloring.  It is not part of an edition of identical (or almost identical) prints from that plate.  It is a collograph, that is, the printing plate is created by building up the base plate rather than by cutting into it, as in the case of an etching, woodcut or drypoint.  I find that, when exploring conceptual images, the collograph process provides greater adaptability and flexibility.

Compression #4 has just returned home after being exhibited at “The Mosaic Muse,” a juried art show at City Hall in Philadelphia, PA in February and March of this year.

Compression #4 has also been accepted into the “Arizona Aqueous” juried art show at the Tubac Center of the Arts in Tubac, Arizona, which opens January 29, 2016. 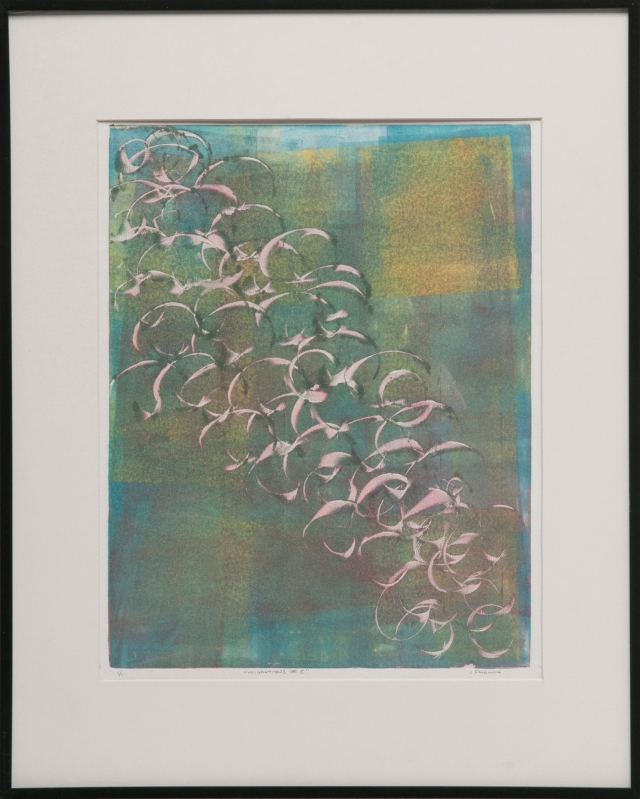 Migrations #5 brings to mind the powerful yet sinuous movement of a flock of birds.  It is a dark field monotype, a unique, one-time image made by applying ink in layers to a hard printing surface and then removing some of the ink to create subtle shading and a sense of movement and depth.  Migrations #5 was recently seen at the juried “Art de Avian” show at the Tubac Art Center in Tucson, Arizona this past April and at the annual juried show at the Abington Arts Center last December.